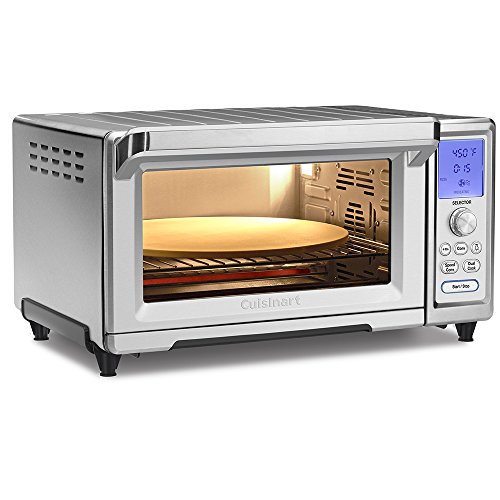 Cuisinart is an American company that has been producing high-quality kitchen appliances since 1971. Their very first product was a food processor; however, their offer has considerably expanded over the years to cookware and other appliances.

With the arrival of air fryer toaster ovens to the market, Cuisinart started to offer different models of this appliance.

Out of all the options of air fryer toaster ovens that Cuisinart offers this has the largest inside surface (ideal for pizzas or flat recipes) and the most modern look. The advantages over the TOA-60 are the preset functions, the slow cooking options, and the digital panel. We recommend this model if you are looking for the full size refined version of this type of appliance. It’s ideal for larger families and its digital functions are one of the things that make us prefer it over the rest of the models. We have selected this model as the best toaster oven air fryer.

The Cuisinart’s TOB-260N1 definitely brings the “Chef´s” name accordingly, since it is the top of the line model of this brand. It combines convection with the other 14 cooking options for customized results. Also, it brings new features until now absent in other Cuisinart´s toaster oven such as interior light, almost one cubic foot of inside volume and dual cooking. Although more expensive, it is definitely the most complete of the family, and the only one that can replace a full-size oven. 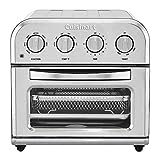 A compact toaster oven that manages to include numerous useful features.

This model is perfect for those small families and single people who are curious in the kitchen and want to try the air frying technology for everyday use. It’s ideal for small kitchens because it can easily replace a toaster, microwave, and oven in one single appliance. Furthermore, it’s one of the most affordable options. Unlike bigger models, this one does not have negative reviews in the thermostat department. 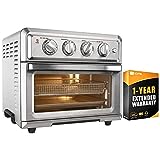 This is a simpler model of all the air fryer toaster oven spectrum of Cuisinart, although it is full size. Out of all the other Cuisinart similar models, this has the biggest inside volume (ideal for roasting chickens or baking cakes), which works for big families and everyday use. However, the fact that there are so many reports of thermostat issues makes this model a risky purchase, and we can’t fully recommend it.

This is by far the worst-ranked model of the Cuisinart AirFryer Toaster Ovens. Its small size is actually a downside for this one. Although the price is very low, it does not make up for the fact that it cooks unevenly and it is unsafe to handle in many cases. We wouldn’t recommend buying this model.

The Cuisinart´s TOB-135N 157 Deluxe model brings some features not present in the more basic units. Those features tend more to the aesthetics, such as the digital panel and three different colors on the outside coating: white, graphite, and classic stainless steel. Reviews-wise, once again the most recurrent negative comment is about the printing in the buttons wearing off; however, it stands in a much better positioned than other ovens of this brand.

This is the Cuisinart´s go-to appliance for families that would like to get involved in convection cooking but don’t want to take too much countertop space with just an air fryer; however, the capacity of the TOB-60N1 accommodates to a medium-sized family. We found this one to have much better reviews than the conventional Cuisinart ovens because of the convection properties and also for having fewer quality issues than other models. Nevertheless, the rubbing of the painting on the dials is a problem still present in the TOB-60N1. 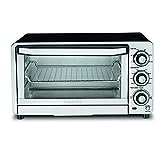 Simple operation and more space are what this unit has to offer, having all the characteristics to satisfy the everyday needs of a medium-sized family or a small gathering. Also, the auto slide-out rack provides safer manipulation. Nevertheless, almost all of the negative reviews were about defective features on the heating elements which tend to bend and crack, suggesting that this is not an isolated incident but a continuous issue with this model.

This toaster oven is the one to have for everyday use for a small family or couples that are looking for simple meals that don’t require a full-sized oven. The auto slide-out rack is an innovative solution to the problem of taking out the food without needing to put your hands inside the hot oven. However, the negative reviews that show issues with the quality are numerous, so we take those into consideration. 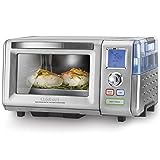 This oven model is unique and perfect for those medium to small-sized families who are interested in changing their lifestyle into a healthier one through steam heat. It also offers the option to combine cooking styles to get you that brown crusty exterior with smooth inside in a faster way. On the downside, the leakage issue although rare it is fatal to the unit and may appear after several uses when the warranty may not cover it.

The main difference between these models is that the CSO-300N is focused on convection and steam heat cooking and the TOB-80N model is a classic toaster oven mainly for toasting and warming use. Size wise they also differ, the CSO-300N is practically twice the size of the TOB-80N.

These two models differ on the use that can be given to them, the CSO-300N is mostly oriented for baking bread, dough or vegetables since it got steam heat technology, and the TOB-40N comes with the typical toaster oven options such as toast, warm, broil, bake. The size is pretty similar on both of them, and when it comes down to reviews, the CSO-300N shows more acceptance.

Both of these models share almost the same pre-set configurations, except “bagel”, only present in the  TOB-40N. The other difference is the size: the TOB-80N has a 0.35 ft interior space and the TOB-40N comes with 0.50 ft volume. Basically, the choice between them comes down to the capacity needed.

These two ovens differentiate each other on the use given. The TOB-60N1 is a conventional toaster oven with a convection baking and broiling model, and the CSO-300N model belongs to another line from Cuisinart oriented to steam baking, although it can be used for conventional everyday toasting. The capacity of both is 0.6 cft, so they can fit a 12” pizza or casserole. Another difference is that the CSO-300N comes with a digital panel where the mode, temperature, and other settings are more visible.

The TOB-80N is a simple model that comes with the basic functions of a toaster oven that also bakes and broils. On the other hand, the TOB-60N1 brings the convection baking besides all of the configurations of a mini-oven. Size-wise, the TOB-60N1 almost duplicates the TOB-80N´s capacity.

The TOB-60N1, besides having convection technology, differs from the TOB-40N on the capacity, being the first one a little bigger. An advantage the TOB-40N has over the 60N1 is definitely the auto slide-out rack, which allows the user to handle the hot food in a safer way.

Both of these models offer convection modes; however, the CSO-300N is specially designed for steam cooking and baking, and the TOB-135N is a toaster oven with convection settings. They both have digital panels for temperature and time visualizations and have the same inside volume: 0.6 ft.

The TOB-80N comes with the typical toasting, warming, broiling settings and with manual knobs that control temperature and intensity of toasting, the TOB-135N being almost twice the size comes with all those modes plus defrosting and convection, that can be controlled through a digital screen alongside with timing.

The TOB-40N is 0.1 ft smaller than the TOB-135N, and function-wise is similar to the TOB-80N, in which you can choose between warm, broil, bake, and toast mode. The TOB-135N, besides convection, offers defrosting and a digital screen where the temperature and time remaining are shown. As a safety measure, the TOB-40N has an auto slide-out rack that the TOB-135N doesn´t have.

The TOB-135N is the sophisticated version of the TOB-60N1 since they both have the same capacity. The TOB-135N comes with all the cooking modes the TOB-60N1 has plus defrosting and three rack positions, which offers more flexibility and height when needed. On the ratings, the TOB-135N  seems to have more acceptance. In addition, the controlling screen is present on the TOB-135N.

The TOB-260N1 comes with 15 pre-set configurations for cooking; however, it is unable to steam heat cook as the CSO-300N can. On the other hand, the TOB-260N1 is a multi-purpose appliance that can replace a full-size convection oven and microwave, unlike the CSO-300N, which is more a steam/bake oriented machine.

The TOB-80N is the TOB-260N1´s little brother, being one-third of the size and only with 4 configurations against 15 that the 260N1 has. The TOB-80N doesn’t come with convection technology nor digital display. These two models satisfy very different needs of capacity and variety.

The TOB-40N has half the internal capacity of the TOB-260N1, and option-wise it comes with the basic configurations of a small oven. On the other hand, the TOB-260N1 can execute more customized recipes but at a higher price, which can be three times the cost of the TOB-40N.

These two models share the convection cooking technology at two different sizes, being the TOB-60N1 40% smaller than the TOB-260N1. Consecutively, the TOB-60N1´s price is also 40% the price of the TOB-260N1. Besides the size, the 260N1 has a digital screen and 7 more pre-set configurations than the other.

Out of the bunch, these two are the most similar. However, when it comes to capacity, TOB-260N1 is much bigger. In addition, it comes with the auto slide-out rack, which is a very missed feature that unfortunately the TOB-135N doesn’t come with. Also, the TOB-260N1 being the top of the line, comes with 15 pre-set configurations vs the 10 of the TOB-135N.